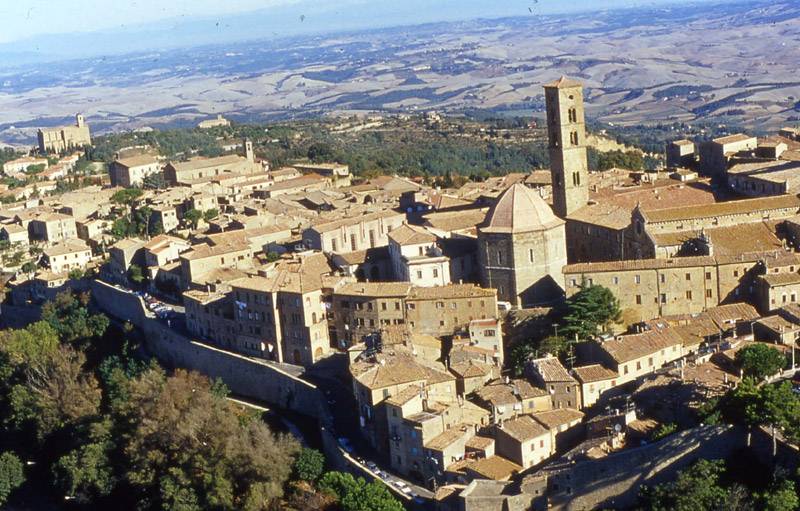 Volterra, situated upon a high hill, dominates the Era and Cecina valleys in a landscape showing the green, side by side with the Biancane, a form of erosion and outcrop of clays dating back to the earliest times. The town is of Etruscan origins whose traces are still the walls, a gate ( la porta dell’Arco) and the Guarnacci Museum, one of the most important museums of the Etruscan Civilization.
In the Museum there is a particularly interesting work known as “Ombra della Sera”, a charming bronze statuette representing a young man (II Century BC) in a fantastically elongated shape, with his arms adhering to the body. You can find its reproduction in many shops in town. There are also important remains of the Roman times such as the Theatre with its cavea with the access steps and the stage with numerous columns.
The Piazza dei Priori surrounded by austere palaces dates back to the medieval times, the Duomo with a rich wooden ceiling of the 16th century and many valuable sculptures and paintings, the house-towers.

On the highest point of Volterra there is a wonderful park which dominates the town, the fascinating surrounding landscape and the Fortezza Medicea, now being used as a house of detention.
La Pinacoteca (Civil Gallery) presents many works of art: “Cristo in Gloria” by Ghirlandaio, the “Annunciazione” by Luca Signorelli and la “Deposizione dalla Croce” by Rosso Fiorentino.

Just outside Volterra on the road leading to Pisa it is possible to see the Balze, a spectacular and striking cliff, made up of limestone, clays and arenaceous strata. This phenomenon is caused by the erosion which during the centuries has swallowed up necropolis, churches and buildings. In Volterra there are some important cultural and oenogastronomic events: in July “Volterrateatro”, one of the most prestigious experimental shows in the field of dramaturgy and in August the medieval week with several meetings among which costume games and parades.